In the previous posts we looked in to the basic concepts of SOA. Thought of moving to a new term in the technology world called Microservices Architecture. Actually the term is the only thing which is new to SOA world. The concepts behind the microservices architecture came with SOA. However if you’re not familiar with SOA and compare the microservices architecture with Monolithic applications development then this would be a new concept for you. Assuming you have the knowledge in SOA, we will justify the above argument which is Microservices Architecture is a sub set of SOA. 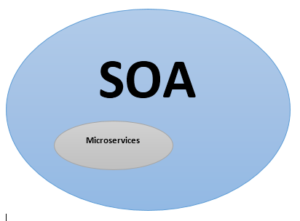 What is Microservices Architecture?

Microservices architectural style is an approach of developing a single application as a suite of small services, each running in its own process and communicating with lightweight mechanisms, often an HTTP resource API. These services are built around business capabilities and independently deployable by fully automated deployment machinery. There is a bare minimum of centralized management of these services, which may be written in different programming languages and use different data storage technologies. – “Martin, Fowler”

Let us concentrate on the definition of microservices architecture and discuss about each special characteristics.

The concept “small services which build around business capabilities”, is a concept we discussed under SOA. Which is Agnostic Logic and Entity Service concept in SOA. Those services are reusable, also concentrate on single small business problem.

The statement “Developing single application as a suite of small services” is yet another well establish concept in SOA known as “Service Composition”. There we have a Service Inventory which is a collection of reusable small services which will help to compose large services / applications.

The newly introduce concept on microservices architecture when compare to SOA is; microservices is individually deployable services which make them very easy to apply continuous integration and deployment. Where in SOA we deploy our services in shared resources. Microservices architecture is more driven by DevOps practices. Mostly deployed in cloud infrastructure, each service has the capability to auto scaling in built. With the immerging container technologies like Docker and surrounding technologies like Mesos and Kubernates will ensure the deploying micro services will be more unwind than ever. This concept will maximize the decoupling of logic and in addition the platform they are deployed. In the long run microservices architecture will minimize the change management cost compare to traditional SOA.

However if you have properly deign and implemented your SOA solution then you should be able to easily deploy your services independently in Tomcat / Nginx application servers across the nodes in your cluster too. Which will cover the key feature in micro services architecture.
In SOA, ESB and BPEL orchestration software plays a major role in building communication structures between different systems enterprise applications. Let’s see how microservices architecture replaces those tools.

Enterprise Service Bus (ESB) main capabilities are message routing, choreography, transformation, and applying business rules. In the microservices architecture ESB capabilities are covered through smart end points and dump pipes. REST protocol with different end points (smart endpoints) which has appropriate logic behind it will ensure the covering of ESB and BPEL orchestration capabilities we see in SOA. Application of a lightweight message bus act as the dump pipes in microservices architecture. It can be simply implemented using tools like RabbitMQ. The key added feature from dump pipes is reliable asynchronous messaging between services which is also common in SOA.

Below diagram illustrate the how microservices architecture differentiate from SOA. 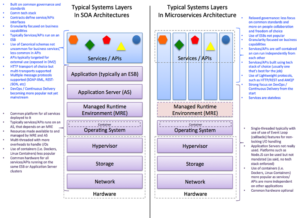 As we learned from the previous posts, the main strategic goal of Service Orientation is that service must be inherently composable. 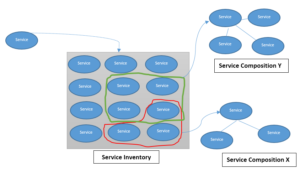 As you can see in the above diagram we can reuse services and compose service compositions which will provide a comprehensive solution for a complex problems in the business domain.

So as the time progress developers will get new requirements and as the first step they will check the service inventory.

The new services must be compliance with the set of rules we defined in the earlier posts, and must be placed in the service inventory with intention of future reuse and composition.

In a large organization which has multiple business domains it’s hard to maintain a single service inventory. So to ensure quick service discovery and easy maintenance, there we introduce a concept called Domain Service Inventory.

Each of the domain inventory is standardized and governed independently. For example, Finance, Shipping, Cargo, HR like domains can be exist in a large organization which has multiple subsidiaries. So having inventory for each domain will be a more organized inventory. 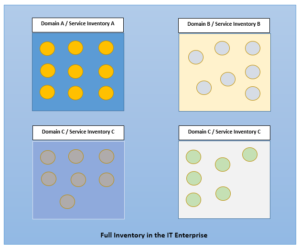 Now we completed the design of a Service Oriented Solution. In the coming posts lets investigate on how we can implement those using JAVA and many other systems in the global market.

In this post we will work on how to model the Service Oriented Solution for a particular business problem.

Firstly what is a Business Problem?

It’s a business process which required automated solution. After implementing the business solution business will achieve the following goal.

Let’s start the real work by organizing the business process actions into two primary categories which we identified in the earlier post, Agnostic & Non-Agnostic.  To do so we need to do the following steps

Now we have organized the solution properly from the above process. So let’s build the Service Oriented solution in the next post.

In previous posts we identified what is a service. In this post let’s have a feeling about Service Inventory and Service Composition. Later discuss about Service modeling.

As illustrated in the above diagram we build services to support different problems. All those services are placed in a store which we name as Service Inventory. Using the inventory we can take one or more services and bind them together to produce a service which can be a solution for a another problem. This approach is known as service composition.  Above is the simplest explanation regarding Service, Service Inventory and Service Composition.

Now we have the fundamental knowledge about basic concepts of SOA. So let’s start the SOA designing from the basic level: “Service Modeling”

The first step in service modeling process is to identify and organize large logical units, so that they can be reassemble into service oriented solutions. Which means we need to group and categorize these according to the nature of their logic. When grouping the logical units there are two main categories: Agnostic and Non Agnostics logic

Agnostic Logic does not have any relationship to a parent task. So it can be used in multiple purposes. Hence it’s a reusable component and will help to automate multiple business process.

With the logical units we can model the Services. There are four main types of Service Models.

With the above service categories and the logical unit behaviors let’s Breakdown a business problem and design the Service Oriented solution in the next post.

Previous blog post, we had an introduction to SOA. In this post let’s find out how we can apply SOA in our enterprise solution.

In theory we have Eight Deign Principles which we need to follow in Service Oriented Design Model. 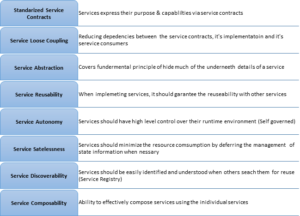 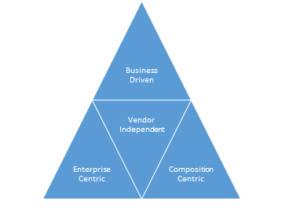 In-addition our SOA solution can be one from the following types;

Service Inventory Architecture: Architecture that supports a collection of related services that are independently standardized and governed 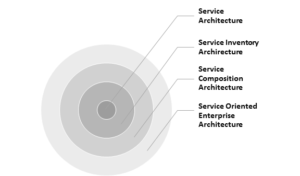 Now we have a clear idea about the design principles, SOA characteristics and four types. In the next post let’s further discuss about Service , Service Inventory and Service Composition.

SOA is a concept which was introduced in late 1996 and now it’s a fully-fledged concept in enterprise application development.  However this blog post is mainly focus on technical people who are new to Service Oriented Architecture. Firstly let’s start as a beginner and then discuss about more advance topics in the coming posts.

Will start our discussion by concentrating on the three words which makeup the SOA; Service, Service Orientation and Service Oriented Architecture.

In software application world service is small to large scale unit which contains a solution for a business problem. In SOA, web services are the main component that we relate as a service. However we need to keep in mind that web service is not the only service we consider in SOA. As explained above it can be in any form.

In SOA we can describe service as a collection of capabilities. Service will expose functionality of an application without a user interface, so it can be utilized by other applications / components.

We have services which have some set of capabilities that can be used by applications. Also we have a well define design model that define on how those services can be coordinate with each service / application. Hence SOA is the architecture that result from the applying service orientation.

Now we know how SOA is derived. Therefore, let’s discuss on how we can adopt to Service Orientation design model in the next post.